077: Adoption, Foster Care, and Growing up with Two Mums

Babies grown in hearts and not in tummies

I was born into a traditional, 2.4-children-style family where Dad went out to work and Mum stayed at home. And I’ve mirrored that ‘normal’ set-up now I have a family of my own. Mum plus dad equals children. Simple. But because of that, it’s easy to be blinkered to other family structures. 40 years later, blended, same sex, solo parent and adoptive families are equally celebrated.

In today’s episode of Mum-to-Mum Monday we’ll be talking about unconventional families. Growing up in a same sex family with two mums; bucking the trend of the traditional 1980’s expectation; adopting children of a different heritage; and how unique family set-ups work in todays world.

My guest today is Jesse Toksvig-Stewart.

Jesse grew up in Surrey in the UK with her two Mums, Sandi and Peta, and her siblings, Megan and Theo. In the late ’80s this family structure was seen as unconventional. But to Jesse, it was normal. And it was all she knew. Later in her childhood when her mums split up, Jesse and her siblings divided their time between the two households. Her family has recently been extended even more, when Sandi remarried another woman, and gave Jesse a new step-sister.

The family is close, and Jesse still lives near her mums house, with her boyfriend, Adam. They have recently warmly welcomed a sister from Pakistan heritage into their fold, whom Peta has adopted.

Wanting to map the early years of her step-sister, adopted sister, and little nephew in a baby book, Jesse realised they only catered for the conventional. Looking back at her own baby record book, she saw it was full of crossed out words and hand written headings.

Jesse was saddened that although times have changed and the world is more accepting, the printed world was lagging behind. There was no memory book that catered for her own special family, so she set out to create her own. A baby record book that celebrated her new sister’s unique place in their family, and in the world.

Alongside her illustrator friend, Kat Willott, they created an open record book called ‘My Amazing Family and Me’ to welcome all children to families, no matter how they arrive, when they arrive, or how unique their family setup is.

In today’s episode, we go deep on everything from same sex parents, adopted children and dealing with the sideways glances, to discussing the issues that children from unique family circumstances face, separation anxiety, and how we can all help out in the way we respond to them.

I’m delighted to welcome Jesse to my show today. She teaches us that families are built on love, not genetics and that understanding, tolerance and acceptance should be at the root of all families, no matter how unconventional their beginnings.

In this episode we talk about:

Jesse, in the pink helmet, with her two mums and siblings in the late 1980’s

3 Great Resources to Help you Manage Your Childs Separation Anxiety

Hint: Number 2 comes from ‘The Queen of Common Sense’

JESSE’S BOOK: My Amazing Family and Me

GIVEAWAY: Sorry, the giveaway from this episode has now expired

PSSST, IS IT JUST ME? Thank you to my daughter Elizabeth, age 3 from Canberra, Australia.

I’ve been meaning to contact you for weeks but life keeps getting in the way. Know that feeling? I just wanted to say thanks for your podcast. I’ve just listened to episode 71 and once again feel inspired and, dare I say, empowered by it. You always come across as an honest, genuine and kind mum and I thought you might appreciate to know that you’ve become a huge influence in my life. Keep up the wonderful work! 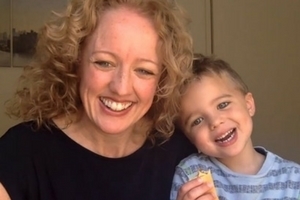 Have you heard about Let's Conquer Motherhood? As a Mummy Mentor, Lisa York helps aspirational mums with young children to make the very most of their mum-life. Find out more by clicking the 'Program' tab at the top of this page.
076: Avoid Muddling Through by Keeping Your Eye on the Goal | Michelle Daws...